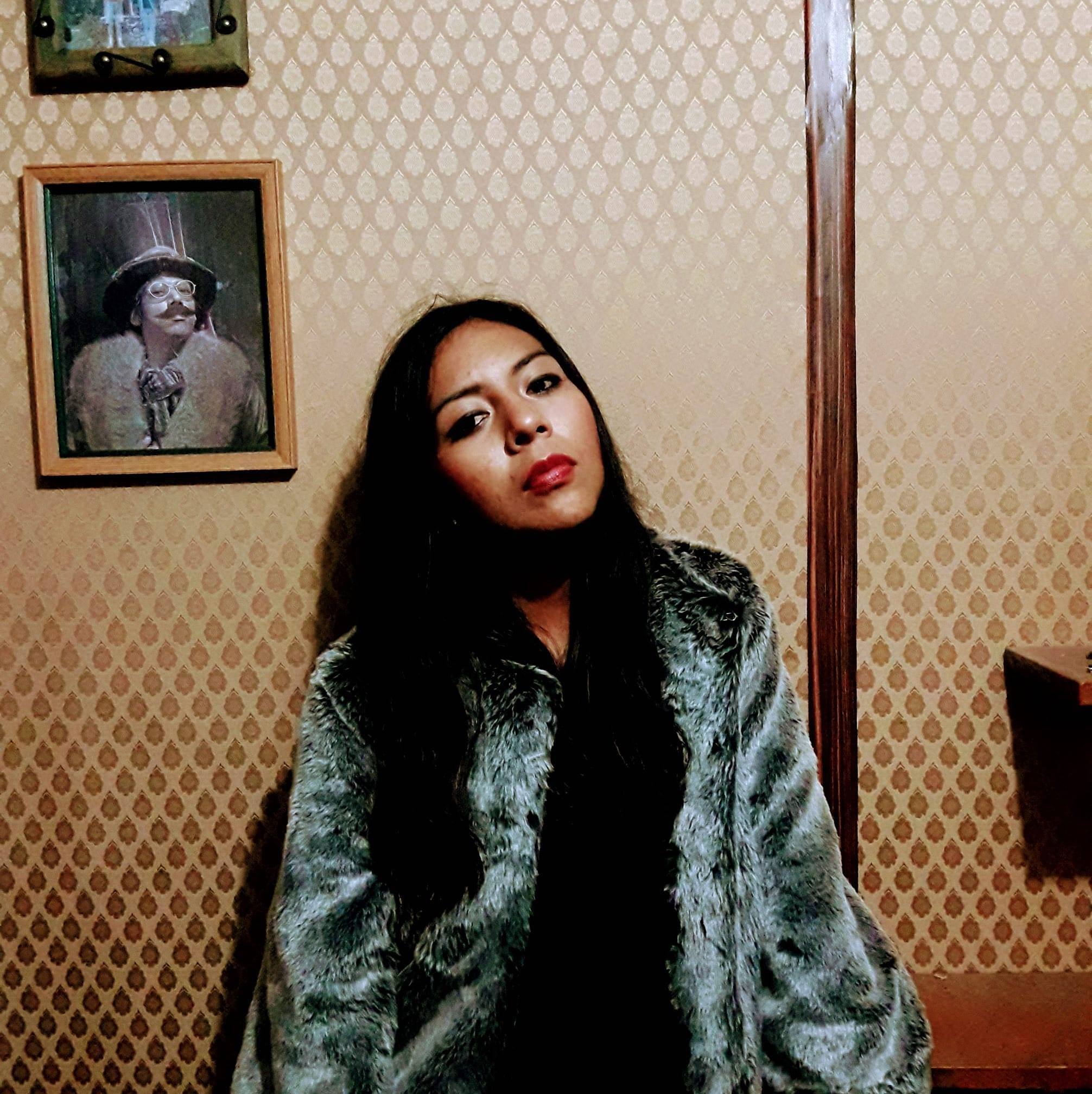 I’m a playwright, theatre director and actress. I also compose the music for my own plays. I direct an independent theatre company named “Teatro Glam&Roll” and I work as a scenic director and dramaturgist in the scenic company “Relatos del Anahuac”, where we work with prehispanic tales from ancient Mexico.

I direct my own written plays, most of them are performed at specific sites like libraries, schools, main squares and recreational sites like pubs or restaurants, with the intention to get close with audiences that are far from conventional theatre spaces but also to brake the distance between audience and performers and make them part of what they are seeing.

My characters are voiceless in the everyday life, they are the forgotten, rejected and losers, but by telling us their story we can see a moment of brilliance in their life, the one that normally we do not know.

I work with music in all my performances, because through them the characters are also built and because I find in music another mean of expression that connects immediately with the audience. I dare to say that my characters are around me and that music is part of the soundtrack in which we take refuge every day.

I wrote a play with which at the end of 2020 I received the Saltillo National Dramaturgy Award: “Punkaland. La tierra prometida ” (Punkaland. The promised land), situated in an indigenous region in Oaxaca and in which an earthquake occurred in September 2017. In this context, my characters whom were survivors from the disaster start a road to redemption. They were outcasts and rejected for being different and wanting things different from what is expected of them in a community. They were rejected in a community ruled by protocols of customs and traditions. So I talk through them about identity and friendship as salvation. The play was written in spanish with slang in zapotec language and english. I also wrote a score of songs that accompany the journey of the characters and they found in an old cassette of Johnny Cash music, a hero that heals their souls.

This piece is important to me because it resumes much of what I’ve been working so far, my identity as a creator but mainly as a person who grew facing different cultures, my passion for music, and the creation of characters inspired in my life, trying to give voice to the forsaken characters type.

Last year I directed a play named “Table Dance” by Victor Hugo Rascón Banda. I worked it via zoom which was my first encounter with this platform. This story it’s based in a true one of a discotheque that burned down in Mexico city and where it was uncovered that the dancers were part of a network of trafficking in women moved by high influences.

I translated the “dance world” as the moment where they dream of a better life, where they are powerful and pictured it as a Broadway musical or a vaudevillel show to contrast it with the dark and cruel world they live every day. So they dance, sing and interact with the audience, the real one as if they were there, sitting in the real table show, listening every dancer’ story.

Right now, I am particularly very proud of my play “Cherry Sour y la La Tragedia del Pink Flamingo”, initially I wrote it to be a monologue where through a female character tell a life of waste and abandonment and the pains of being a woman with no chance of survival in this world in a moment where she is blamed for murdering her boyfriend, a local and famous musician. So, this is a story where she rises her voice to the first time to an audience that never saw her. During my exploration as a writer, I worked a lot with the musical part that accompanies the character and I decided to include the band and one more voice, its male counterpart, in the text, her boyfriend. Thus it also becomes a love / heartbreak story where both characters dialogue, sing their story, a tragic one, both lost and forgotten. In addition to directing it, given the pandemic in which we live, I decided to act it.

With this work, I synthesized what “glam” is for me, the shine in the ruined lives of my characters, music is their refuge and their way of communicating. For this, I used all possible glam emblems, both in wardrobe, aesthetic image and musical composition to relate to this music style and life style from the 70’s. This play has been performing since the beginning of the year, live and virtually, at forums and specific sites, adapting it to the circumstances we’re facing.

I suggested to work a noir fiction. I’ve been reading and writing this type of stories for a couple of years. I find in them a mean to talk about social problems. These types of stories seem eternal to me, because they revolve around social themes that are: crime, violence, corrupt and decaying cities, through archetypes that function according to their role and that under very clear premises, the story it can be carried wherever you want. With this, they seem possible to me to play with them in different tones and temporalities. Although I like these stories in their original time (around 100 years ago), I would be interested in working on a contemporary story with the premises of the genre, because I am interested in questioning the present from the past, but above all, with awareness of the current context in the that we live and with my initiative to always seek the approach of the public towards what they see, immerse them in the stories, as if they were their own or very close and induce them to play.

The “play” part. It’s something that caught my attention from the first moment I heard about this laboratory. Speaking by myself, I believe that word it’s something that we often forget about while creating something as theatre makers, let’s not forget that the theatre it’s ludic and that as performers we need to go back to that part to keep it alive and to renew it in every aspect of our work, and the passion for it.

Also in the fact that it focuses on the connection with the viewer and that the “play” occurs not only between the scenic artists but also between them and with the audience, which I think gives it another experience, but above all, it gives more life to the stage act.

And of course, the opportunity to work with an international crew of artists, not only the mentors but also the selected artists that will take part. I believe that this is something that will not only create networks but will offer different perspectives from the creation process, from the diversity of contexts and life experiences.

Especially in these times of confinement that we have been experiencing: new and different forms of communication with and towards the viewer. As a scenic creator, I consider the spectator a fundamental piece.

In my type of theatre I have worked characters of contemporary context and whose need is to tell a life story. My inspiration is the “common people”, those who normally do not have a voice but who do through theatre.

For this reason, I am interested in developing and exploring different scenic skills and ways of telling stories to reach the viewer, communicate with him and connect with him. During this year and a half, we have lived through the screens and carried out an activity that requires a live spectator and that has forced us to adapt to virtual media. Thinking of a laboratory of this nature, which works with the viewer and in which we will work in a virtual way and which also takes place in this context, excites me too much, since I believe that it will undeniably provide the necessary skills for living communication despite the screens. And that above all, it will potentiate them and it will be the basis for dynamic creations and ways of working despite the technologies involved.

I hope to surprise myself, play a lot and above all, find different communication channels regardless of the medium.