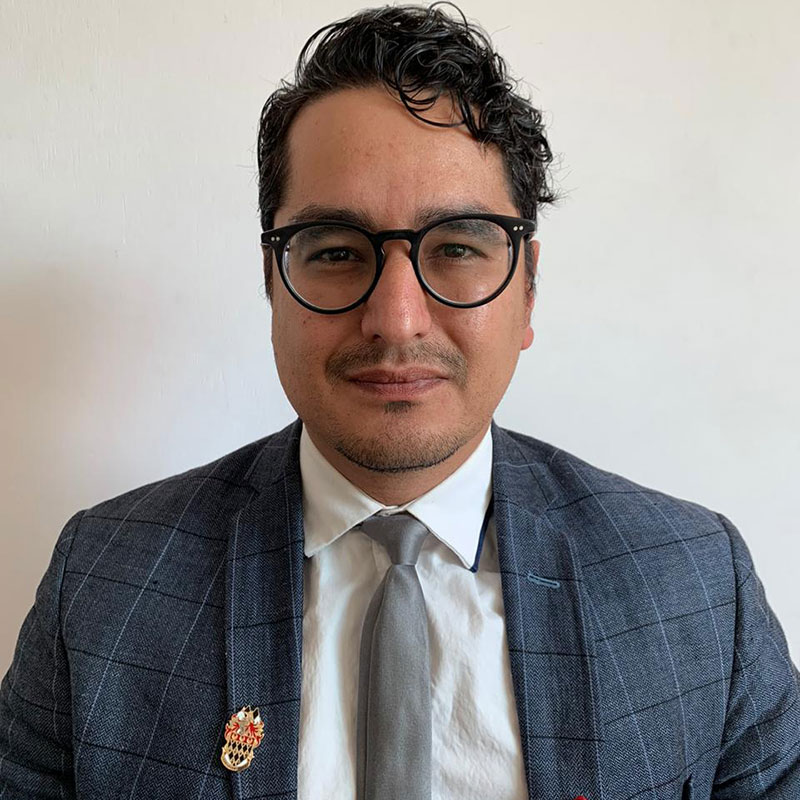 My name is Diego Sosa, I have been a professional writer for the past 20 years. Whilst my main activity has been theatre, I have also had the chance to develop scripts for radio, television and film.

I hold a PhD in Media Arts and Drama from Royal Holloway, University of London. My dissertation was about film adaptations to the stage, with a practical element consisting in adapting Buñuel and Dalí’s 1929 film, Un Chien Andalou. Such an endeavour, required me to make a thorough research on the writers of the Spanish Literary Avant-garde, looking for tropes that may have been used in the devising of the film. This comparative analysis allowed me to devise the characters, the plot, and the structure for my adaptation of the film to the stage.

This experience made me realise that comparing media opens new paths of inquiry and when a quarantine was instated around the world due to the pandemic, I began thinking of ways to use the resources of film and theatre for on-line shows. Being a part of the IPTL residency is an opportunity for me to delve further into this inquiry.

Although I have had very enriching experiences collaborating with artists from around the world, of which I am particularly proud of, I believe that my dissertation play, My Andalusian Dog, is the piece I’m most proud of.

I had the chance of developing this piece throughout the PhD programme, I therefore had a lot of time to think of every detail of my piece, something I hadn’t done before, at least not with such care! This level of attention to the slightest of details, led me to rethink my whole practice as an artist, and to consider every element in drama from a whole different scope.

Moreover, since Buñuel and Dalí’s film is part of the surrealist catalogue, nothing in it makes a clear sense, at least not from the beginning, I was therefore challenged into creating a completely new story with what the images suggested, which is very much open to interpretation. Therefore, this effort that required a lot of research but also creativity and imagination.

Seeing the script finished and staged in Paris, where the film was first premiered, is one of the proudest moments in my career so far.

I have 2 ideas that I wish to develop in this residency. The first one is called “Civil Disobedience” and it’s about a group of demonstrators that are leading a manifestation that demands for a change in policy from a particular government that will range from democratic to authoritarian, depending on the level of the game.

Social media will also play a massive role in this piece, as it’s meant to be followed live, by audiences via a specific SM platform.

The second piece is called “Bargaining” and it’s about a loving couple that are just starting to learn how to live with each other. The couple will go through different moments of conflict and the audiences must decide what’s the best way to approach the problem. If they go about it too harshly love may fade away, but if they do so too lightly then the characters start losing their individuality.

I have always been passionate about videogames, especially first-person shooters, like Call of Duty. I remember this one scene from this game, where the Russian army is about to face a battery of Nazi machineguns, with very little chance of success or survival by that matter. In front of the soldiers there’s an officer who gives them a speech about sacrifice and love for their country, whilst the soldiers chanted, some in fear and some with true excitement. I remember that, as the officer was speaking, not only did I felt moved but I started to feel I was an actual part of this army heading into certain death. I was completely involved with the game.

I wish to understand how to do this in theatre, as I am convinced that this is the way a member of the audience should feel when they are watching a play and I believe playable theatre can teach me how to obtain this level of involvement from the audience.

When the COVID-19 pandemic started around the world and artists, especially those dedicated to the live arts, began exploring digital theatre. Much like the early stages of cinema, the “on-live” was constantly compared to theatre and most of the discussions amongst artists and academics, revolted around the question of whether this could be considered theatre or not, and I always thought this was a mistake because if this was indeed a new way language then it could not be compared to a pre-existing media but it had to be seen with a completely new set of eyes, just like the first film critics did at the dawn of cinema.

As I wrote earlier, I truly believe that comparing media can open new ways of inquiry, and therefore new ways of exploration. What I hope to learn from IPTL is how to create interactive theatre pieces and see what I can bring from that into my own practice and vice versa, to look a theatre, my own theatre, with a completely new set of eyes.

So, I guess what I’m saying is that what I really hope to learn from IPTL is how to make theatre all over again.